Genr8 Developments has also today released CGI images of the restaurant and bar areas of the 140-bedroom Hilton Garden Inn, currently under construction at Genr8’s Smithfield development in Hanley.

Smithfield is a partnership between Genr8 and Stoke-on-Trent City Council, and to date has boosted the local economy by over £80m of GVA per annum.

The £20m hotel’s interior has been designed by ICA and marks the first time that the Hilton brand has been brought to Stoke-on-Trent.

Richard Ingham, partner at Genr8, said: “Bringing the Hilton brand to Stoke-on-Trent is a significant step and we’re delighted to reach this important milestone.

“It was always important to us that the hotel was of the highest possible quality, in keeping with the rest of the Smithfield scheme and reflective of the ambitious regeneration the city is currently undergoing.” 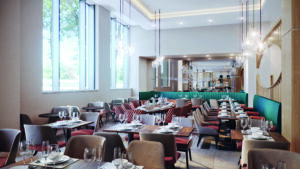 Work began on the hotel in Spring 2018 as Genr8 appointed Pochin as the main contractor for the project. It is expected to complete towards the end of this year.

Richard continued: “The scheme is really starting to take shape now and it is a very exciting time for all involved. We wanted to use this opportunity to also release some of the imagery of the hotel front of house interiors.

“We’re determined to make Smithfield a real destination, a place which has something for everyone and has the community at its heart.

“We have no doubt that a hotel of this calibre will be a huge success, and a provide much-needed, first-class accommodation offering for those visiting the city.” 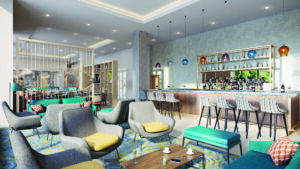 The apartments will be launched to market in the coming months.

The build-to-rent concept is being brought to Stoke-on-Trent for the first time by Genr8 and Fortior Homes – a private housing company established by Stoke-on-Trent City Council to deliver high-quality homes that address identified gaps in the private sector housing market.

The apartments will be managed by LIV Group, a residential managing agent which specialises in the build-to-let market.

Councillor Daniel Jellyman, cabinet member for regeneration, infrastructure and heritage at Stoke-on-Trent City Council, said: “The topping out of the Hilton Garden Inn hotel marks a key milestone in our work to transform and reinvent our city centre.

“This is a major investment in Stoke-on-Trent’s leisure offer – the hotel will attract new business and visitors, support existing businesses with increased footfall and help towards improving the overall perception of our city. 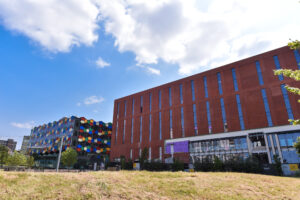 “Alongside the exciting expansion of the Potteries Museum and Art Gallery, and the imminent redevelopment of the East West Precinct site, this is a really exciting time for the city. It also creates jobs and opportunities for our residents, which is one of our key priorities.”

Councillor Abi Brown, leader of Stoke-on-Trent City Council, said: “Over the last few years we have made some major progress forward as a city, underlining that Stoke-on-Trent continues to be one of the most exciting places in the UK at the moment.

“This is one of a number of large regeneration projects happening across the city, and the presence of a brand like Hilton Garden Inn here sends a strong signal that investors have real confidence in Stoke-on-Trent. We are an ambitious city, and we are on the up.”

Detailed work is now ongoing on the next phases of development at Smithfield which are likely to include more office space and a second block of build-to-rent apartments.