The build-to-rent apartments are officially at their highest point, and the shell of the building will now start to take shape.

Richard Ingham, Partner at Genr8, said: “It’s a hugely exciting milestone for the project and it’s great that we could all be here to celebrate it. Clayworks will be bringing something truly unique to Stoke-on-Trent, and as completion edges nearer, we feel confident that the scheme is going to surpass all expectations.”

Richard was joined by Cllr Ann James, leader of Stoke-on-Trent City Council, who added: “This is a momentous occasion for Fortior Homes and for the authority, as we are witnessing the huge progress that is being made to transform housing across the city.”

Councillor Randy Conteh, the council’s cabinet member for housing, communities and safer city, added: “We have huge aspirations for housing in Stoke-on-Trent, and to make this city a place where people actively choose to live and work.

“Housing growth is at the heart of the city’s journey to economic independence, and making sure we have the right sort of homes that are high quality and attractive – like these apartments at Smithfield – is an important part of this process.” 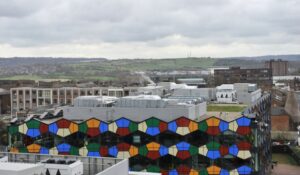 It was revealed earlier this year that the apartments are to be called Clayworks, after the brand identity being created by brand and placemaking agency D.S.Emotion.

At the time, the project team described their ambition “to provide the platform for a previously unavailable homestyle for Stoke-on-Trent, embracing all that is good about the revolution in living patterns”.

The build-to-rent concept is being brought to Stoke-on-Trent for the first time by Genr8 and Fortior Homes – a private housing company established by Stoke-on-Trent City Council to deliver high-quality homes that address identified gaps in the private sector housing market.

The apartments will be managed by LIV Group, a residential managing agent which specialises in the build-to-let market.

Pochin’s, the lead contractor on the scheme, also recently revealed that since commencing works in February 2018, more than £9m has been spent by the construction company with local businesses and subcontractors – across both the apartments and the hotel elements of the project.

Richard added: “The building’s brickwork, cladding and internal works are progressing well, and we remain on programme to complete the building before the end of 2019.”